The Church of the End Times 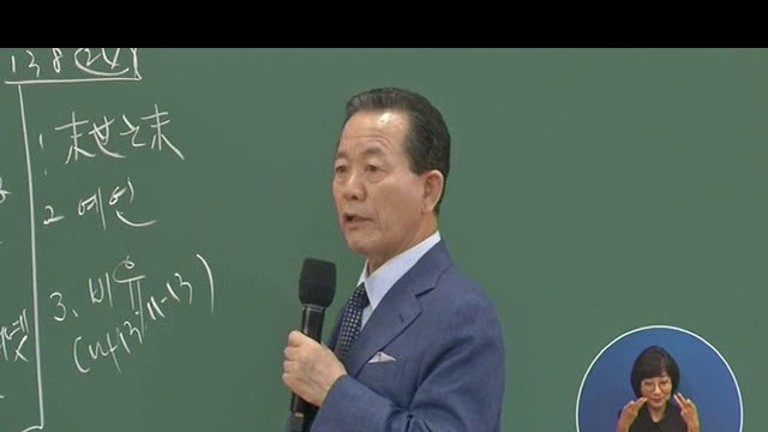 Will you be able to do world evangelization? It may sound foolish, but it’s recorded in the Bible. However, the evangelism field is full people who have conquered the world by receiving Satan’s power twenty–four hours a day. These individuals are affiliated with the three organizations. What absolute covenant must you hold onto during the end times?

1. The Six Tools of the Three Organizations
The three organizations seize people by using demon possession as their lever. They prepare their vessels to receive strength from Satan through the transcendental meditation movement and the “chi” or energy movement. They exhort influence by taking over universities and schools around the world. In addition, through culture, the three organizations have seized young adults and Remnants and have gathered people through the Internet and media in order to propagate their ideologies.

2. The Absolute Covenant Toward the Church of the End Times
For you who have grabbed hold of the covenant of Christ, God’s Kingdom, and only the filling of the Holy Spirit, (Acts 1:1, 3, and 8) God has also given you the absolute covenant of “church” that will save those churches that have collapsed. In the church, there are those who hold onto lamps without oil; (Matthew 25:1~13) those who bury their talents and have no interest in the Gospel; (Matthew 25:14~30) and those who are like goats that cause disputes within the church. (Matthew 25: 30~33) Therefore, you must grab hold of the covenant of church that serves the true Master and prepares to save lives. (Matthew 25:13, 18, and 34)

You must restore what Satan has stolen. The churches of the world are closing their doors and those who aren’t Christ are acting as they are the masters. In reality, Satan is their master. That’s why Jesus said, “My house shall be called a house of prayer for all nations.” In order to save the world beyond Korea, you must accurately hold onto the Gospel and challenge toward it. As long as you properly hold onto the covenant, God will answer you.

[Covenantal Prayer] Dear God, may I hold onto Your absolute covenant of restoring the churches that have collapsed in the end times.

There were ten virgins holding lamps waiting for the groom. Because he was taking a long time, the ten virgins became drowsy and fell asleep. After hearing a sound in the middle of the night, they quickly went out to greet the groom.
At that time, five of them were foolish and didn’t bring any extra oil for their lamps. The other five were wise and took flasks of oil. The five foolish virgins asked the other five if they could spare some of their oil.
However, the five wise virgins replied, “Since there will not be enough for us and for you, go rather to the dealers and buy for yourselves.”
The five foolish virgins went to buy oil. Meanwhile the groom arrived, and only those virgins who were prepared entered into the marriage feast.
The five foolish virgins earnestly requested to enter, but the doors remained firmly shut.
Prev 03 February 2020 (Mon.) Prayer Journal 03 February 2020 (Mon.) Prayer Journal 2020.02.03by 31 January 2020 (Fri.) Prayer Journal Next 31 January 2020 (Fri.) Prayer Journal 2020.01.31by
0