Find What Was Stolen

Ephesians 6:10~20 Finally, be strong in the Lord and in the strength of his might. Put on the whole armor of God, that you may be able to stand against the schemes of the devil. (10~11)

♬Hymn for scheduled worship: Korean/English Hymnal #381 I Wandered in the Shades (Unified Hymn #425) 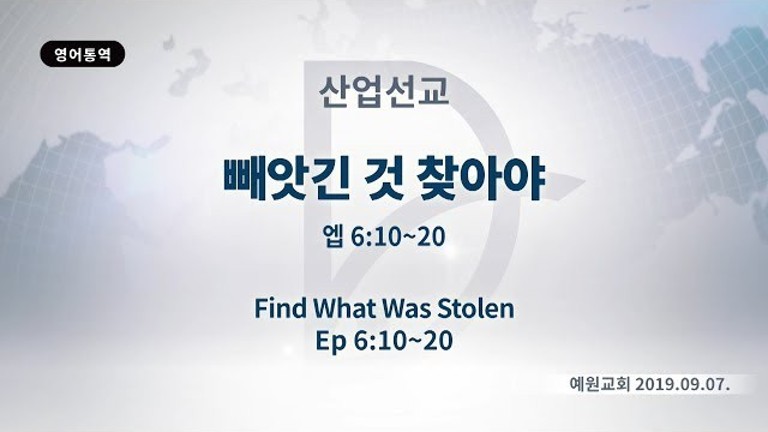 When God’s Word is deeply imprinted, you become strengthened in Christ. Conversely, if you lose hold of His Word, you suffer from spiritual diseases. These include serious mental afflictions, acts of depravity, and even continuous thoughts of suicide. What has Satan stolen from you that makes you continuously suffer like this?

1. Your Fundamental and Spiritual Answers Have Been Stolen
It may seem as if you’re capable of doing whatever you set your mind to, but in reality, the true “you” have been stolen. (Genesis 3:4~5) You don’t even realize that you’re in a state of imprisonment by Satan (Genesis 6:4~5) as you quickly and blindly chase after your goal of success. (Genesis 11:1~8) Because you have lost your spiritual answers, you inevitably lose trust in God’s Power to fulfill His desires through you. (Philippians 1:6, 2:13, and 4:13)

2. Restore Your Spiritual Life That Was Stolen
You’ve tried different methods countless times, only to find yourself going to shamans, (Acts 13:5~12) getting your fortune told, (Acts 16:16~18) and diligently worshiping idols. (Acts 19:8~20) However, instead of life getting better, it has only fallen deeper into a giant pit. You must promptly realize that “only Gospel,” which is Christ, is the answer. “Only Christ” can restore your fundamentals. Christ is the lone solution and the way to have “re-creation” take place in your spiritual life.

[Covenantal Prayer] Dear God, as I concentrate on the Gospel, help me to find and restore all that was stolen by Satan.

One out of four citizens suffer from mental illness...
“People receive a ‘Scarlet Letter’ just for consultation.”

- Lifetime prevalence of mental illness in Koreans stands at 25.4 percent... “It’s no longer another person’s problem.”
- The mind and threshold have been lowered; and as a result...
“One side still faces avoidance.”
- Even if a person goes to an emergency room for attempted suicide...
“One in five are denied treatment.”
Last year, the Ministry of Health and Welfare surveyed 5,102 adults over the age of eighteen. According to the results of the survey, 25.4 percent suffered from mental illness at least once in their lifetime. And, another one in four suffered from mental health issues more than once in their lifetime.
In particular, 15.4 percent of adults have seriously considered committing suicide at least once throughout their lives. Another 3 percent have planned to commit suicide, and 2.4 percent have attempted to actually end their lives. Among them, 50.1 percent of those who thought of suicide; 68.7 percent of those who planned it; and 75.1 percent of those who actually went through with it had experienced more than one mental disorder throughout their lives. According to the Central Suicide Prevention Center, in 2016, 10,320 people took their own lives. Among them, 4,713 cases involved psychiatric problems that directly led to suicidal deaths.
In conclusion, one in three cases of suicide was caused by deteriorating mental health problems.
Prev 21 January 2020 (Tues.) Prayer Journal